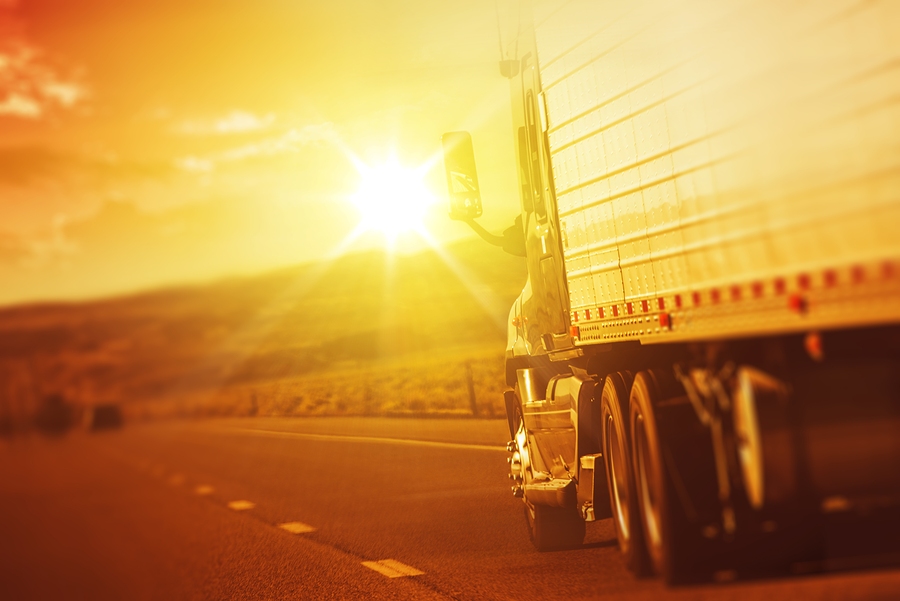 How many of us are frustrated that we are not moving fast enough when it comes to operating sustainably, ridding ourselves from chronic oil dependency, (including plastics), and being honest that global warming is real? I want to see a faster drive to financing and pushing new innovations into reality and practical everyday use. As in, for example, let’s say solarizing semi trucks.

So What Does a (pushy) Designer Do?

Put the idea of solar-powered semi trucks out there, for starters. I’m not a scientist but discovering the Overview Effect website with its aerial image below sparked the idea and what I do, shaping design out of ideas. For me, outside, seemingly unrelated sources lead to concepts that develop into a cohesive brand identity that can carry a story — ingredients necessary to effectively craft a brand and marketing strategy. (Side note: I’ve never seen a cloverleaf-like this within our Minnesotan freeway infrastructure. It’s quite lovely, almost like a Celtic Cross). 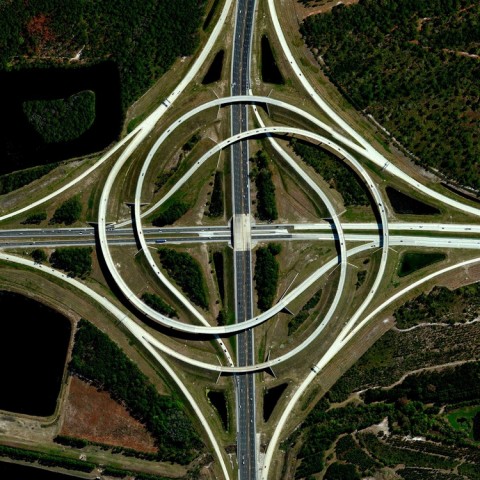 The Overview Effect, first described by author Frank White in 1987, is an experience that transforms astronauts’ perspective of Earth and mankind’s place upon it. Common features of the experience are a feeling of awe for the planet, a profound understanding of the interconnection of all life, and a renewed sense of responsibility for taking care of the environment.

‘Overview’ is a short film that explores this phenomenon through interviews with astronauts who have experienced the Overview Effect and features important commentary on the wider implications of this understanding for our society and our relationship to the environment.

This got me thinking. We have a huge trucking industry in this country, (obvious to anyone with a daily highway commute), and they are big, they are loud, they are smelly and they pollute. It’s unlikely we’re going to stop needing trucks for land transport of goods and produce, but what if we can make them quieter, less stinky and non-polluting like we are doing with cars?

Container tops of most semis are flat. What if solar panels were attached to the top and energy generated by the sun gets sent to a battery (or a fuel cell) that basically runs the engine (including refrigeration), but not like the standard batteries used with diesel engines. The truck would run exclusively on solar power and backed by the energy stored in the battery or fuel cell.

It’s not a novel idea. I’m certain there is a company, an innovator or entrepreneur who is working on this right now. The result would be a quieter truck that doesn’t need oil or diesel so no more foul-smelling fumes and CO2 emissions. There is already technology out there where the by-product of a hydrogen fuel cell is H2O. Wouldn’t it be something if large semi trucks and trailers were not only completely emissions free, but generated water to boot? 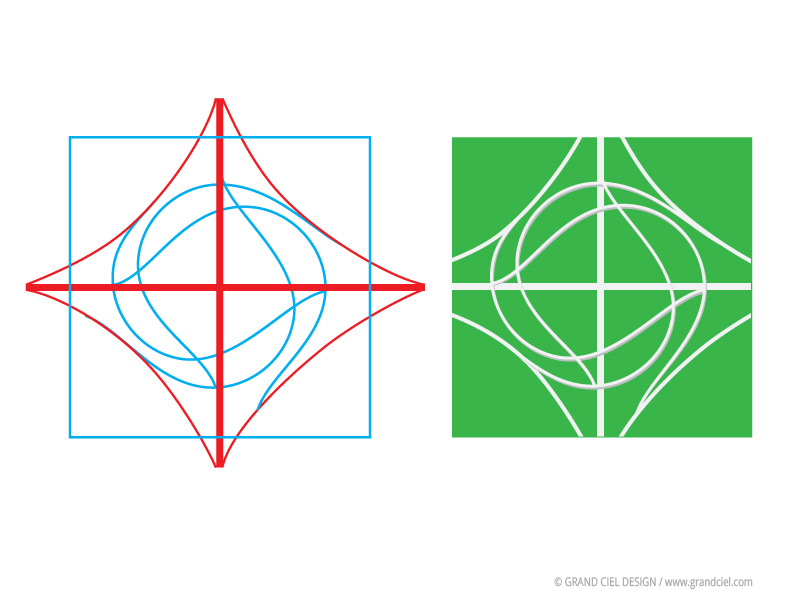 This got me thinking. Above is work in progress for the DRIVE brand (a proof of concept project),
based on the cloverleaf aerial pattern.

When that company, innovator or entrepreneur is ready to brand their enterprise, I’m ready. What I do, working with (environmental) start-ups is begin by branding their enterprise, finding the right name (or working with a name), creating a face, a visual vocabulary, key messages and craft the story around their innovation. This work facilitates what is so new to now resonate and communicate with the audiences start-ups want to reach. The internal result clients tell me is “Now it feels real.” That’s an important place for clients to get to when building business and in launching it out into the world. 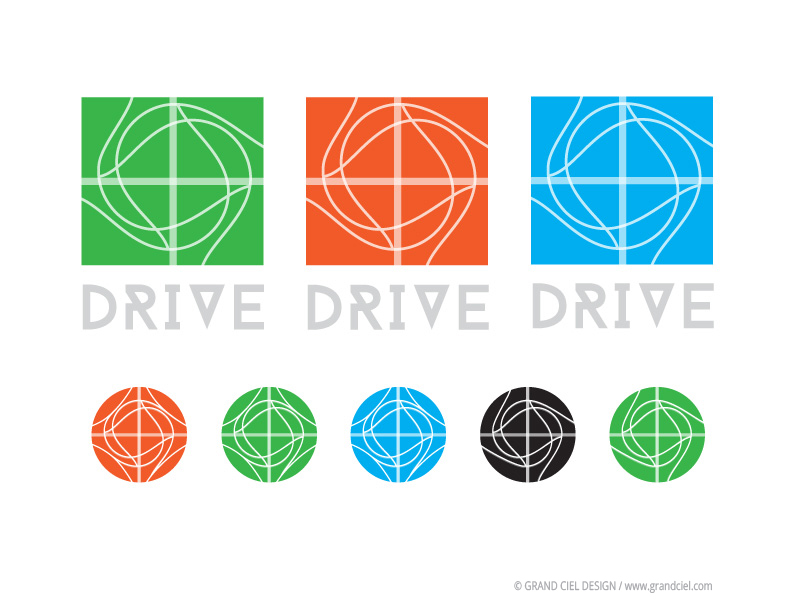 The process continues. Working with the base cloverleaf pattern, adding and subtracting elements, trying on basic stand-in colors and typography. Baron Neue typeface felt right with its bold angles and “V” shape as a visual tie-in with road signs.

Moving from a static box shape to circle visually makes sense for the brand, i.e. wheels, transporting, a network of highways and connecting. But the logo itself is still too busy. Simple works best for building recognition. 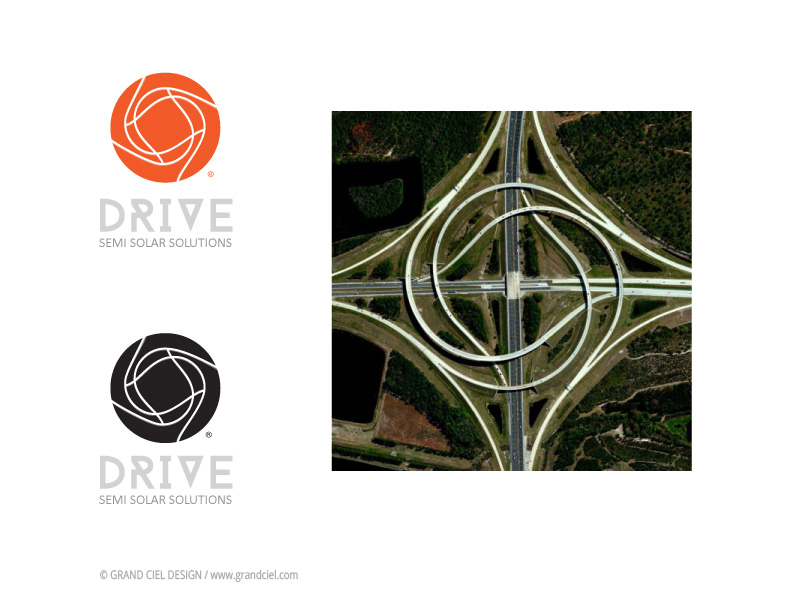 Shown above is a more refined nearly complete logo identity for the DRIVE (solar semi truck technology) concept. The logo has been simplified to leave only the cloverleaf in place. It was really tempting to keep the “crossroads” as well as the angled “entrance ramp” lines. Getting to simple is rarely simple.

The aerial cloverleaf highway “pattern” is one that shows a circular connection — an aerial vantage point represents the solar energy coming from above, an energy in which we all benefit. The (solar) energy cycle continues into the truck’s battery allowing it to travel back and forth from its destinations. On a broader view, it shows how we are all connected by how we conduct commerce, from factories and fields to families. That’s a condensed version of how I might “sell it.”

No new branding presentation would be complete without “test driving it” on social media.
Above is how DRIVE’s official Facebook page might look and feel.