Can Design Save Democracy? 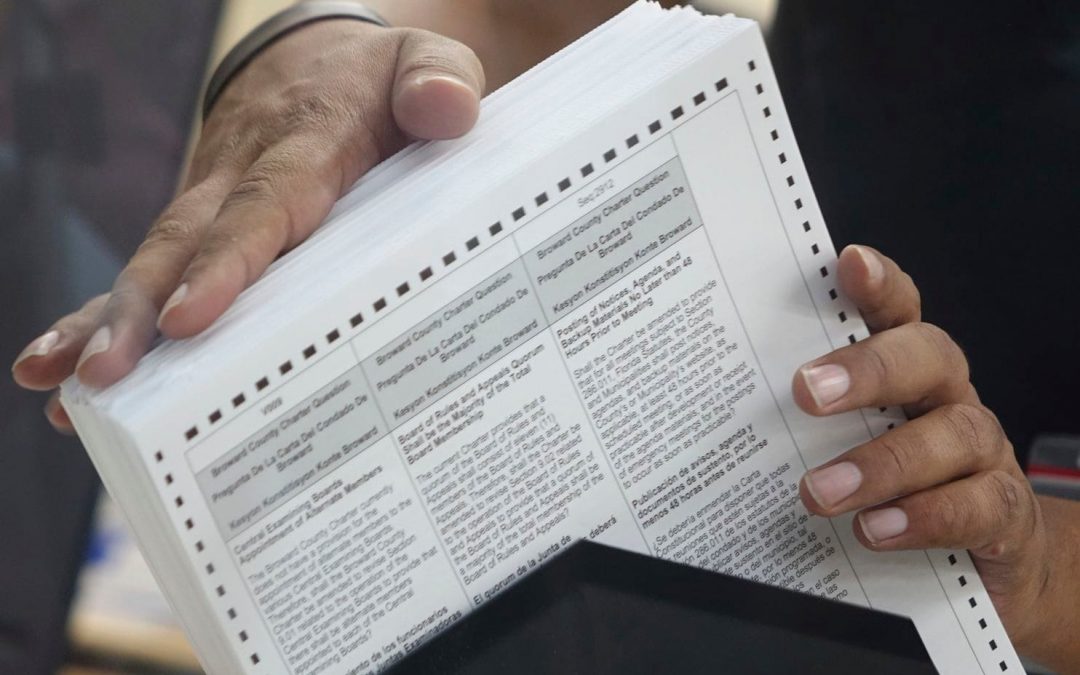 I know, I know. We are incredibly exhausted from the 2018 mid-term elections. Yet it was a marvel to witness and be a part of. More than 47 percent of voting-eligible came out to cast their vote ~ a 50-year high turnout for a mid-term election. That statistic gives me hope for our delicate democracy.

Still the process of voting continues to be a difficult challenge despite the fact it is our constitutional right as citizens. We know the maliciousness of gerrymandering, the barriers voter ID laws create, and the overt voter suppression. However, there’s another issue that plagues our democracy, our election process and its outcomes and that is ballot design.

Until recently, I never gave ballot design a much thought. I viewed ballots as sort of a “non-design moment” needing no more decision than how those big tags attached to bed box springs are laid out. Here in Minnesota, the ballots are pretty straightforward. I never had a question on how to fill them out or confused to which candidate I was actually voting for. And that’s the point, but I’ll get to that a little later. It’s important to understand how far we’ve come in the way of ballots and the election process, for better or worse.

Voting in America ~ A Brief History

When our country was starting out, there was no such thing as paper ballots. Elections were a rowdy, often drunken event where men vocally cast their votes. This was a huge problem because it made votes public. In turn, this led to people badging other people to vote for “their guy,” which often resulted in brawls, fist fights, and other grizzly scenes. The voting environment in those days was case enough to bar women from voting. No place for a lady. But then again, politics has always been a contentious affair regardless of gender.

Fast forward to the late 1800s. By now, each political party is publishing their list of candidates for office in the newspapers, a.k.a the party ticket. To vote, people would have to first buy a newspaper, cut out the ticket of the political party of choice and then bring that ticket to their polling place to cast their vote. There wasn’t a way to vote across party lines ~ either you voted for all Republican or all Democratic candidates. It’s where we get the term “a straight ticket.” However, if people didn’t want to vote a straight ticket, they would cut out letters to form the names of the candidates they wanted to vote for — kinda like a creepy random note— and paste them onto a piece of paper and bring that to their polling place instead. Which you could say resulted in “a split ticket.” 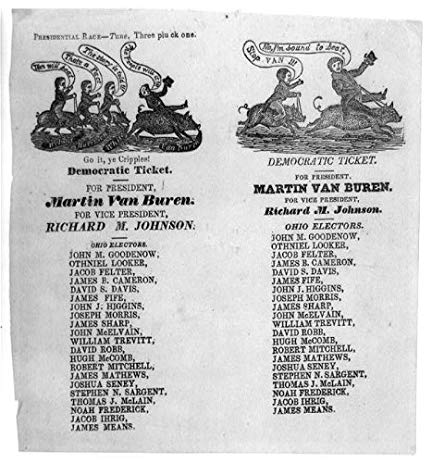 It wasn’t until the late 1900’s that our country adopted what is called the “Australian ballot.” This was a huge game-changer for our election process. Now ballots were government issued and printed on special paper. They became guarded and treated like currency. States were responsible for conducting elections, still, there were a lot of variations in ballot systems between state and county lines. Elections became hyper-local so in any given election cycle and depending on where you lived, ballots contained candidates for a wide range of offices, from the highest in our country right down to county drain commissioner.

And Here Is Where the Danger Lies…

While government issued paper ballots revolutionized the way we vote, it also opened the gate for a whole bunch of malicious intent. A glaring example of this happening was in the 2000 election, Florida being ground zero. It wasn’t just the manual re-count and the infamous hanging chads that had election judges anguish over each voter’s intention, it was how Palm Beach Country voted. Palm Beach County historically and overwhelmingly votes Democrat. But in 2000, the fair citizens of Palm Beach County overwhelmingly voted for Patrick Buchanan – a paleoconservative political commentator, running as a Reform Party candidate. 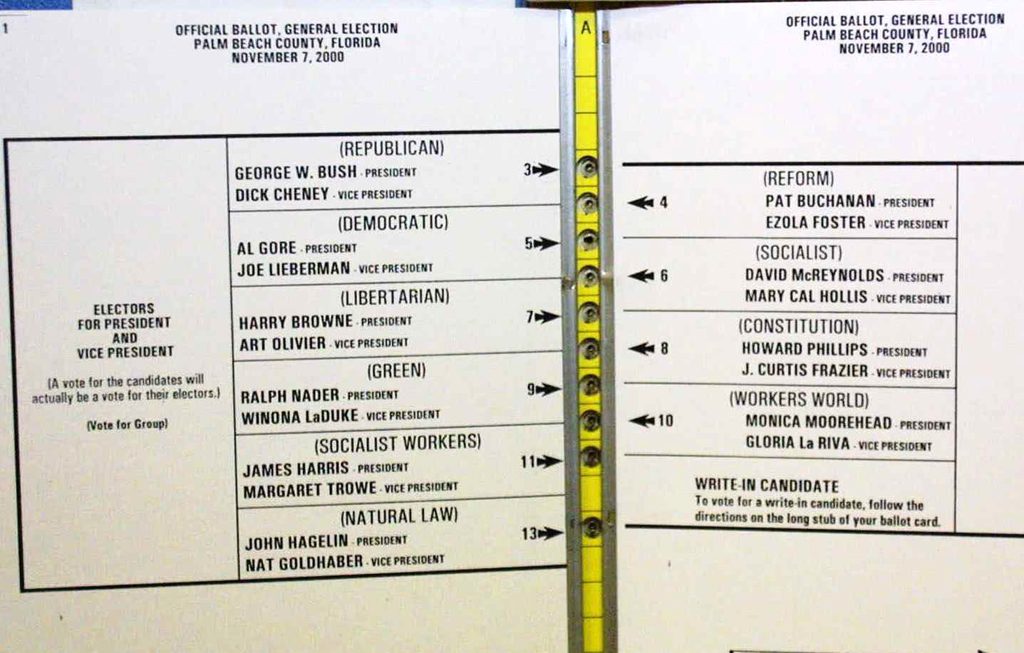 And why was this? Ballot design. Candidate names and parties were laid out across two pages — the dubious butterfly ballot — which made selecting a candidate of choice confusing, especially to an aging Palm Beach County population. Not only that, the hole punch order in which Presidential candidates were set on the Florida ballot tripped people up, too. George W. Bush hole punch was first, Patrick Buchanan second and Al Gore third. This was not the logical order voters expected. Most expected to see the Republican candidate first, the Democrat candidate second and the Reform party third and so on down the line. This revelation broke a lot of Palm Beach County people’s hearts, they felt guilty for having not cast a vote for Al Gore.

What’s Really Amazing In All This…

With something so fundamentally important to our democracy — the paper ballot — not a single graphic designer, not one, has ever been consulted on how ballots are designed. Graphic design as a discipline accounts for user experience and the desire to make that experience as positive as possible. Is it clear, is it self-explanatory, is it readable, is it inclusive, is it empathetic? Remember my comments on Minnesota ballots? Minnesota ballots may not seem like they are “designed” however, because they are frictionless and easy to use, people don’t see the design, they experience the results of good design. They can vote for who they intended without question.

While there hasn’t been a graphic designer consulted on ballot design, there is the Center for Civic Design and its notable researcher and UX designer Dana Chisneil whose goal is to bring fairness and to ensure voter intent in elections. Her work includes creating Field Guides on how to design a usable ballot. Guides list the Design 101 principles such as using lower case letters instead of all caps, avoid centered type, use large enough type, at least 12-point, choose a san-serif type for readability and only one typeface. Some ballots are designed with multiple typefaces and type weights making it confusing and looking kinda like that “creepy random note” cut-and-paste ballot of the late 1800s. 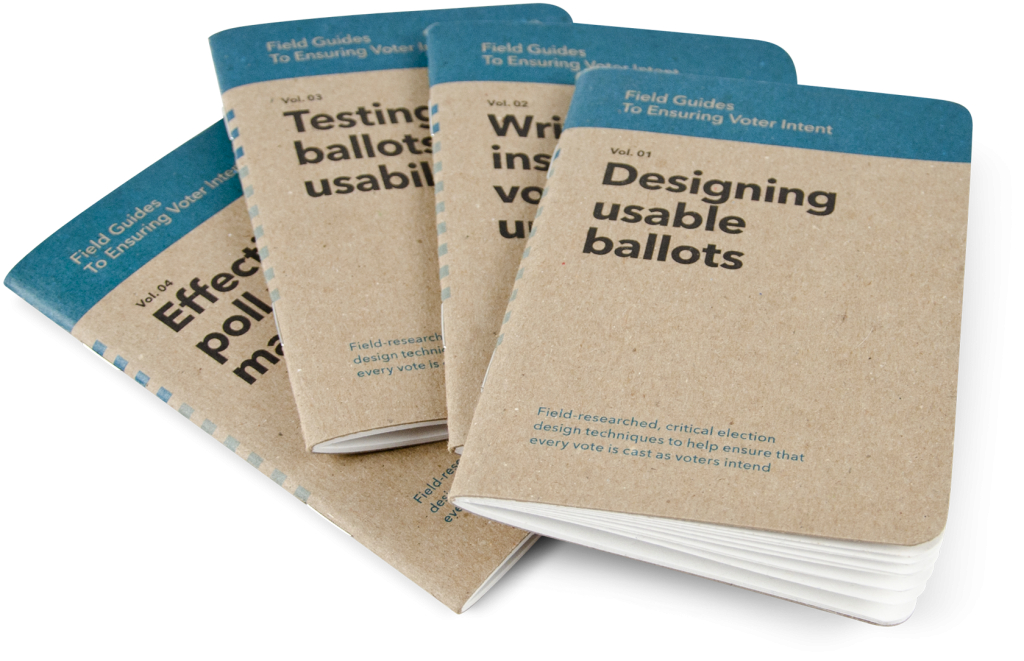 What If Your Polling Place was as Near as Your iPhone?

That’s the idea behind The Anywhere Ballot and it addresses the fundamental question: “What if anyone could vote on any device?” That would make it possible for ALL people, including those with disabilities to vote with any device that they have.

It would be the ultimate in UX design and the biggest game-changer since the Australian ballot. Currently, the Anywhere Ballot is in prototype mode. There are so many issues (low literacy, vision impairment, cognitive disabilities) to address to make it truly universal and web standards-compliant. The day the Anywhere Ballot is officially adopted as the standard for elections, is the day our country becomes a true democracy.

It might mean the end of little red “I Voted” stickers but it’s an election tradition I’m willing to let go.

Anywhere Ballot — what if anyone, anywhere, could vote on any device? from Drew Davies on Vimeo.